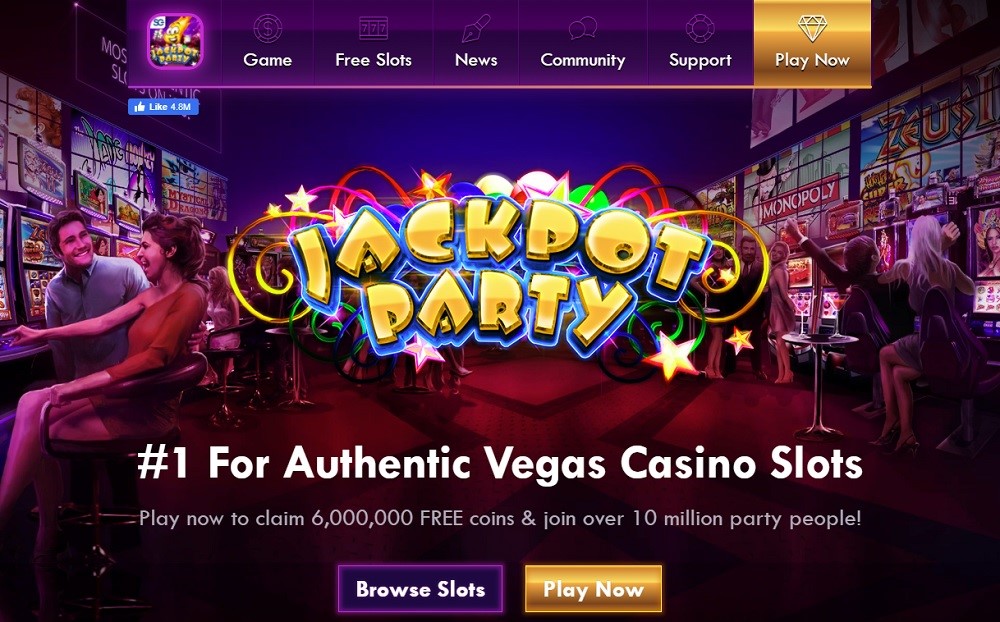 Jackpot Party puts a unique spin on its slots selection – including the ability to compete with friends in daily tournaments!

But is that enough to make the casino worth joining?

Find out in our Jackpot Party review!

You can connect with the casino on social media:

If you otherwise need help, you can contact support via email: support@jackpotparty.com.

What Games Does Jackpot Party Offer?

Jackpot Party is somewhat of an anomaly in that it only offers slots and the only way to play the games is through the mobile app, Amazon, or Facebook.

Despite only offering slots, Jackpot Party doesn’t quite make up for the lack of other games. Instead, players will find the slots lobby pretty limited.

There are also some weird restrictions. Upon registering, you only have access to one slot. As you deposit and spin using the one slot, you unlock more.

This is a weird practice and we’re not entirely happy with it.

On the bright side, the existing slots offer beautiful graphics. There are also many different types and themes once you unlock more.

And, of course, there are jackpots and progressive jackpots to keep you interested and spinning!

Like the main site, Jackpot Party’s member’s area is buzzing with excitement, thanks to its modern, responsive, and colorful design.

As mentioned earlier, the only way to play the games is through the mobile apps, Amazon, or Facebook. Here are the links for the Android and iOS apps.

Especially considering most sites offer a massive selection of games that aren’t locked and an additional rewards program.

Regardless, as you unlock more slots, you get access to several rewards, such as free spins and bonus coins. You’re also given the initial amount of coins for free but eventually you’ll be asked to start paying.

Once you get to the paywall, ID verification will be required, so keep that in mind.

Jackpot Party might only offer slots – but it also had the chance to make itself unique in a great way. Unfortunately, in our opinion, it missed the mark.

But what about the players?

Well, with 126 reviews and a 1.3/5 star user-rating, it’s safe to say most players agree. In fact, the reviews are overwhelmingly negative.

Mark leaves one of the only positive reviews, saying the support staff was amazing.

But Beverly, on the other hand, struggled getting back into her account after getting a new iPhone. Customer support wasn’t helpful, either. Instead, Beverly ended up losing 48 billion in coins.

And Evelyn says while the site used to be fun, in recent years it’s become terrible. She specifically says wins are impossible to come by.

Delores, meanwhile, says Jackpot Party are “horrible people,” as they stole 300 billion of her coins. She warns potential players to stay away.

Finally, Sheila says Jackpot Party “has hit rock bottom!” She says it’s all about money now, though she looks forward to the (potential) future lawsuits.

Unfortunately, the reviews are pretty bad for Jackpot Party so we would recommend avoiding this site for now.

If you’ve played here then don’t forget to leave your review below!