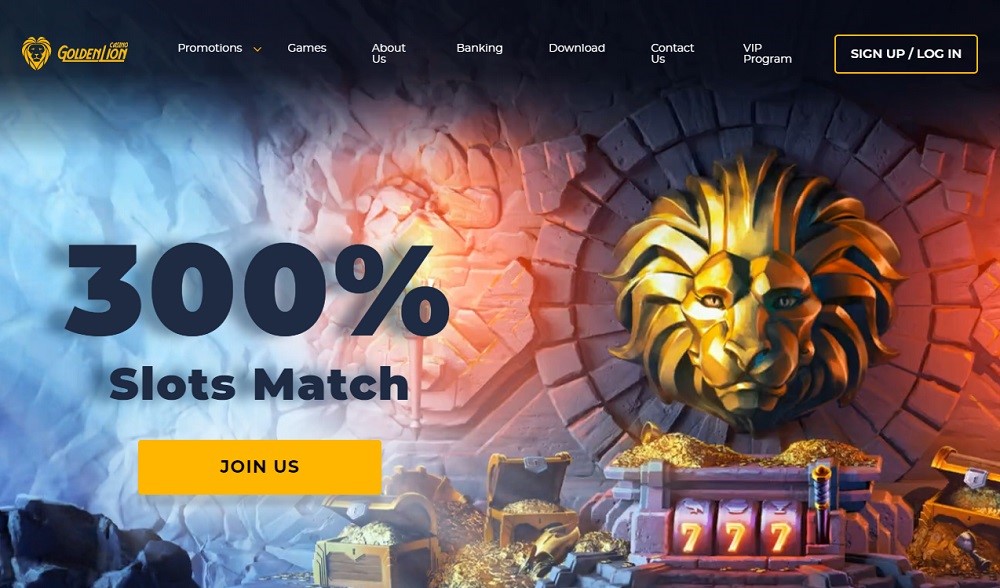 According to the legend it’s named after, Golden Lion Casino will bring prosperity to anyone who worships and praises its mighty Lion spirit.

But is the legend based on reality?

Find out if this is your chance at a life of prosperity by reading our Golden Lion Casino review!

The Golden Lion Casino website displays a modern design with soothing colors, though it could’ve done more with the subtle lion theme.

For assistance, you can contact the king of the jungle via:

Unfortunately, you won’t be able to enjoy live casino games or game shows on this site – but there are at least jackpots and progressive jackpots to look forward to!

Golden Lion Casino’s automated table games lobby at least has a couple of options for everyone…except baccarat fans who are conspicuously left out.

The betting pool is also fair to all players, with a minimum bet of a few cents and a maximum of thousands of dollars.

If roulette is your preferred game, you’ll be stuck with European Roulette.

And poker players are the most spoiled. The options include:

Players will have more luck in the slots lobby, though the selection is far from abundant.

Instead, you’ll find a small blend of Rival and Betsoft slots, including various slot types and themes (like the Jack Frost slot, pictured below).

You’ll also find a betting pool that falls between a few cents and hundreds of dollars.

And, as promised, there are jackpots and progressive jackpots on offer!

Golden Lion Casino’s member’s area is a bit of a mixed bag. On the one hand, the casino finally reflected its namesake with gold colors. On the other hand, the modernity of the main site falls short here.

At the very least, you can access the member’s area on any device, despite no dedicated mobile apps. This is a handy feature for gamers who play on their smartphones or tablets.

There’s also a rewards program that lets you earn loyalty points and progress through three loyalty tiers…though, surprisingly, none of the loyalty tiers is a lion.

Just make sure your verification documents are ready to go when signing up!

With no live games and a limited selection of table games and slots, we didn’t expect much from Golden Lion Casino. But we expected more than 1.7/10 stars!

All 9 reviews we discovered were negative. For example, an inactive user simply warns users to stay away from the site and to ask about a valid license.

And Barney says that while they have many games (?) and a user-friendly site, their bonuses are misleading, and chat support is unprofessional.

“Zuzzica” also complains about the bonuses and their misleading wagering requirements. They also complain about the 50 euro fee to withdraw winnings (which is, admittedly, very steep).

However, instead of the full amount, the withdrawal was approved for $200 without the player’s approval – along with a 25% withdrawal fee.

To put it in perspective, if the player is forced to withdraw $200 at a time and is charged a $50 fee every time, that’s $500 going to the casino instead of the player.

Finally, “FuFighter77” says there are better casinos you can play at, as this one spends too long on verification and withdrawals.

Overall, the reviews for Golden Lion Casino are pretty bad so we recommend checking out our list of the best online casinos instead.

And, if you’ve played here then please leave your review below!