Captain Jack Casino Review (2023) Here’s What We Found Out.. 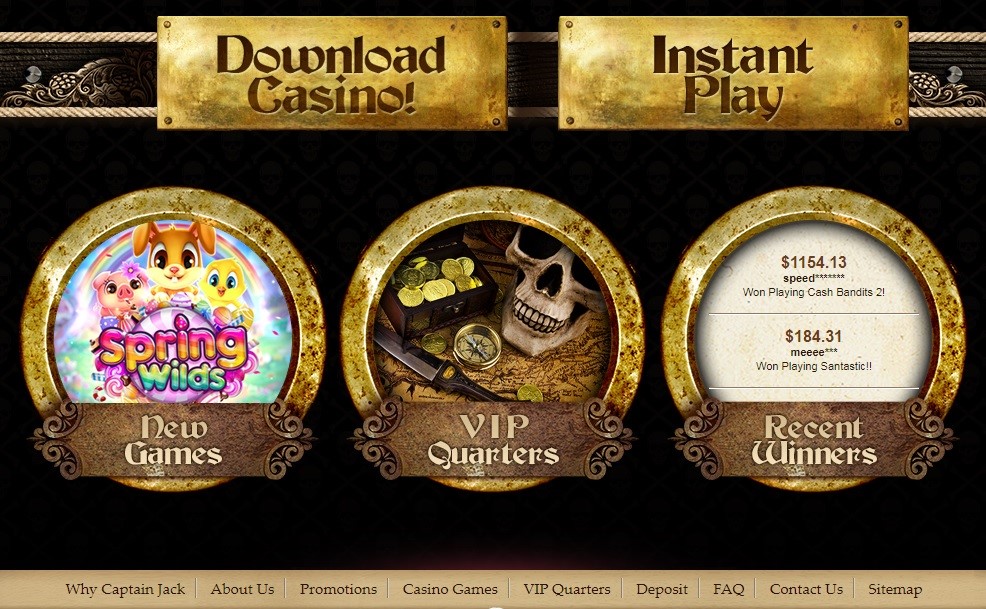 Are you ready to take sail on the Black Pearl with Captain Jack Casino?

So maybe that’s not what the site aimed for with its name, but we can’t help but picture Captain Jack Sparrow regardless!

The question is, will you unearth great treasures like in the film series?

Find out in our Captain Jack Casino review!

Captain Jack Casino’s website is slightly outdated, but there’s a nostalgic charm to it that we can’t deny. It feels reminiscent of the Pirates of the Caribbean film series in its design. It’s also responsive and user-friendly.

You can connect with the company directly via:

Unfortunately, as you can probably tell by the category titles, there are no live games here. But there are jackpots and progressive jackpots – so unearthing treasures is still a possibility!

Captain Jack Casino doesn’t offer an endless sea of automated casino table games, but they at least offer enough to keep you entertained!

And with bets starting at a few cents, you don’t need a lot of money to start digging for treasure. Of course, you can also bet up to thousands of dollars, so if that’s your preference, don’t worry!

Roulette players are, unfortunately, somewhat limited. The only options available are European Roulette and American Roulette.

Blackjack players are given slightly more variety, with variations like:

Baccarat fans are even more limited than roulette players, with Standard Baccarat being the only option, but poker players will find quite the variety:

And perhaps in an attempt to make up for the small selection of games, Captain Jack allows his players to try out the games for free in Practice Mode.

If you were hoping for a more varied slots lobby, we’re sorry to disappoint you. The selection is about the same here, with all games powered by RTG.

Still, there’s enough to keep a slot spinner occupied – and new ones are being added occasionally. This means there’s hope for the Black Pearl and Captain Jack!

Plus, like the previous lobby, the slots lobby is friendly to all budgets. You can surrender as little as a few cents or go all in at hundreds of dollars.

And while the RTG graphics are nothing to bat your eyelashes at, they at least offer a smooth gaming experience. You can also try them out for free in Practice Mode!

The member’s area at Captain Jack Casino resembles the main site in its design, font, and colors – which means the nostalgia is still present. Also like the main site, it’s responsive and user-friendly.

Plus, despite smartphones and tablets not existing during Captain Jack’s heydays, he made sure his casino offers a foolproof experience for on-the-go players!

This is good news, as he hasn’t had time to make dedicated mobile apps yet. (Probably too busy searching for rum.)

You can also become a Captain Jack VIP! Like most VIP programs, you earn points as you deposit and play on the site. There are also loyalty tiers you progress through, along with rewards and perks you unlock.

We had high hopes for Captain Jack Casino, although admittedly, the nostalgic design played a part in that. Unfortunately, our hopes were crushed upon discovering what players had to say.

Out of the 12 reviews we found, Captain Jack and his casino scored 1/10 stars. And a lot of them echoed similar complaints.

“Bee3434” says the games are the only thing to like. But when it comes to withdrawals, the site uses delay tactics to avoid paying for as long as possible.

“TheRealTouche” says the UI is good, and the games are average, but agrees with “Bee3434” that the withdrawal process ruins everything.

And while Cory likes the bonuses, games and says the live chat is decent, he also complains of withdrawal times taking longer than a month.

“BassPlaya07” is no different. They like the games, bonuses, and chat support but say the withdrawal times are extremely slow – and the limit is too small. They won $40,000 but can only withdraw $2,500 at a time.

Manny left the only positive review, echoing the same pros the other reviewers did. But the kicker to his review is – he hadn’t tried withdrawing yet!

Overall, we think that the Captain Jack casino feels quite old and outdated, and it's a shame that they don't have any live dealer games yet.

The reviews are also very bad, so we'd recommend checking out our list of the best online casinos instead.

And, if you've played at the Captain Jack casino then please leave your review below.