Captain Cooks Casino Review (2021) Here’s What We Found Out.. 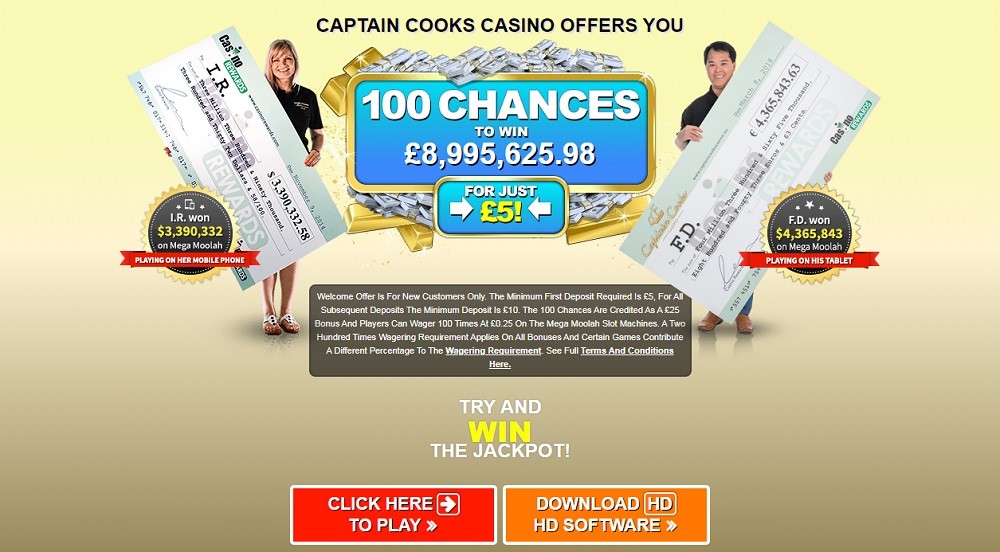 But will you discover new riches or battle payout pirates?

Find out in our Captain Cooks Casino review!

But just like the English ships of old, it remains fast and responsive.

If you need help, you can contact support directly via:

We can’t promise there won’t be pirates, but we do know there are jackpots and progressive jackpots to be won!

Additionally, though live casino games are conspicuous in their absence, the site tries making up for this by offering a Variety tab with scratch cards.

Ready to take after Captain Cook and explore the games?

Although Captain Cooks Casino offers a decent number of automated casino games, they still lag behind the selection available elsewhere.

Nevertheless, American and European Roulette are only two of the numerous options available here.

Meanwhile, blackjack players have an even wider variety to choose from, including:

But unsurprisingly, poker remains the ace up Captain Cooks Casino’s sleeve! We found a few interesting varieties, such as:

The captain didn’t overlook baccarat’s growing popularity either, though you’re limited to No Commission Baccarat and Sic Bo for now.

We’re fond of the phrase “slots are the heart and soul of any casino” – because it’s true!

Unfortunately, Captain Cooks Casino is still navigating these waters with a hesitant toe. While there are a decent number of slots to choose from, it’s a far cry from what you’ll find elsewhere.

Still, the site is regularly adding new slots to its repertoire.

As for the slots themselves, the available collection includes jackpots and progressive jackpots. These are easily found in a separate category.

Overall, Captain Cooks Casino offers a standard selection of Microgaming slots. We aren’t sure any of them are exclusives, but those could still be in the works!

Similar to the main site, Captain Cooks Casino’s member’s area is somewhat outdated. Fortunately, the design remains intuitive – and you shouldn’t have any responsiveness issues!

But they do offer a VIP Casino Rewards Program!

If you’re on any other Apollo Entertainment casinos, it’ll look familiar to you. This is because they’re all connected!

So any time you deposit or play on any of the affiliated sites, you’ll earn VIP points and level up. And each time you do so, you’ll unlock progressively better player rewards to enjoy on any of the sites.

However, account verification is required – even if you’re signed up on other Apollo Entertainment sites. After all, Captain Cook wants to know who’s coming aboard his ship!

Some consider Captain Cook a hero of English history, while others aren’t happy with his legacy.

That same mix of fond memories and frustrating disappointment is found in the player reviews for Captain Cooks Casino!

Luckily, there’s more good than bad – the site has an average player rating of 7.7/10 stars.

An inactive user isn’t disgusted with the site as much as they are with Microgaming’s low payout rate.

Their decision to leave the site was entirely due to finding fairer sailing with online casinos using NextGen software!

Daniel, on the other hand, has a host of issues.

However, from not wanting to wait more than 48 hours for a payout to not understanding the wagering requirements, we wonder how much of these problems are Captain Cooks Casino’s fault.

However, they do highlight that the site looks and feels old. And though they mention payouts can take a few days, they also confirm no honest crewmate will have their share go missing.

Meanwhile, Mari Holm found the support staff quick to respond in a highly courteous manner. Plus, if you give them the correct info, payouts can be as fast as two days!

And thanks to the great bonuses, she isn’t complaining!

We think the design looks a bit outdated and they don’t appear to have any live dealer games, but they do have some positive reviews so could be worth checking out.

Don’t forget to checkout our list of the best online casinos first.

And if you have played at Captain Cooks Casino then please leave a review below!